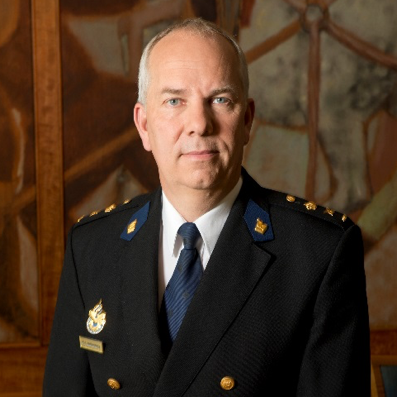 Pieter-Jaap Aalbersberg is Chief of Police of the Amsterdam Police. After his training at the Dutch Police Academy he followed his career mainly in the field of criminal intelligence and combating organised crime, on regional, national and international level. He was in charge of several important criminal investigations and was on behalf of the Dutch authorities a member of several committees on organised crime in the European Union. As a member of the Dutch Board of Police Chiefs he was responsible for the development of the National Intelligence Model and the new strategy on HRM for the Dutch Police. He can be described as a police-chief with strong leadership qualities, involved in strategy building, focus on the operational results and the development of his officers.

Before her appointment to the Supreme Court, she was the foundation Chair of the Victorian Law Reform Commission and Professor of Law at Monash University. She is the only academic to be appointed to the Supreme Court in Victoria’s history, with the vast majority of judges practising as barristers prior to being invited to the bench. In 1985, Ms Neave, then Reader in Law at the University of Melbourne, chaired a board of inquiry into prostitution in Victoria, which recommended legalisation of prostitution under defined conditions, removal of most sanctions against prostitutes, and the use of planning controls to control the locations of brothels. Most of the recommendations were accepted and became law in 1986.

She has held a number of distinguished academic positions, including chairs at four different Australian universities and membership of the Hauser Global Law Faculty of the New York University School of Law. She is a fellow of the Academy of the Social Sciences in Australia, and a life member of the Australian Institute of Judicial Administration, of which she has been a member for more than 10 years.

Allan Rock has since 2008 been President of the University of Ottawa, one of Canada’s leading research universities.

A 1971 graduate of the University’s Faculty of Law, he practised for over two decades as a trial lawyer in Toronto. In 1993, Allan Rock was elected to the Canadian Parliament, and was re-elected in 1997 and 2000. He spent ten years as a member of Prime Minister Jean Chrétien’s Cabinet, holding various senior portfolios: Minister of Justice and Attorney General (1993-1997); Minister of Health (1997-2002) and Minister of Industry and Minister of Infrastructure (2002-2003). He left Parliament in 2003 upon his appointment as Canadian Ambassador to the United Nations in New York, where he was deeply involved in humanitarian, peace-building and development efforts, particularly in Africa, Haiti and Sri Lanka. In June, 2012, the University of Ottawa’s Board of Governors extended Allan Rock’s mandate as President until June 30, 2016.

Clifford Shearing is the Chair of Criminology and Director of the Centre of Criminology, Faculty of Law, University of Cape Town. He also holds the South African National Research Foundation Chair in Security and Justice. He obtained a Ph.D. in Sociology at the University of Toronto in 1977 and is an A rated scholar. Clifford is a well-established and internationally recognised scholar in the field of policing and security. His research and writing has focused on the development of theoretical understandings that can be used to enhance the quality of security and justice governance. A particular focus of his work has been contributing to the development of institutions and processes that enhance the ability of poor collectivities to both direct and add value to their security and justice. He is currently developing research on environmental security.

Clifford has made many contributions to policy development for security strategy. At present he is an Advisory Board member of The Safety Lab, Western Cape Department of Community Safety (DOCS), reshaping security governance in the Western Cape for the Provincial Government, Western Cape. He was on the editorial panel and contributed to the South African National Science Plan developed as part of the Global Change Grand Challenge in 2008. Other policy contributions were to the “Jamaica Constabulary Force (JCF) Strategic Review Panel” 2007 – 2008. Previous policy contributions include developing policing strategy with the Canadian Law Commission, the Patten Commission on Policing for Northern Ireland and as a member of the Goldstone Commission playing a role in developing the strategy for policing South Africa’s first democratic elections.

He has published numerous accredited journal articles and book chapters. A recent publication (with Neil Gunningham and Cameron Holley), published 2012 is entitled The New Environmental Governance, Earthscan. Where’s The Chicken? Making South Africa Safe with John Cartwright was published in 2012 by Burnet Media. Innovative Possibilities: Global Policing Research and Practiceedited by Johnston, L. & Shearing, C., was published by Routledge in 2011.